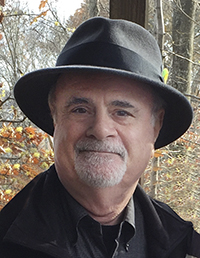 From the early 1970’s George has always considered himself a “conscious creator”. He used the information from forty years of studying the Seth books to change his life. This included using the pendulum to access subconscious information.

In the 1980’ he invented, designed and marketed the first U.L. listed neon dimmer and became the world’s foremost authority on neon lighting, dimming, and interior dimmed graphics. After 12 years in the sign industry, George decided to make a life change.

He learned dowsing from three of the 20th century’s master dowsers, all past presidents or past officers of the American Dowsing Society. His skills today are a result of learning from Harold McCoy, Walt Woods, and Tony Gehringer, to whom he is eternally grateful.

In 1993, he reinvented his company by producing products that would have the ability to change people’s lives; specifically, pendulums and other divination products. George kept the name Xeonix because of its white light metaphor and began designing and manufacturing pendulums and glass dowsing boards. The company has grown to become one of the largest divination companies in the USA.

In 2008, his joint venture with Hampton Roads publishing, “THE MAGIC MIRROR”, won “Best Divination Book of the Year” and “Best Divination Kit of the Year” by The Coalition of Visionary Resources. COVR is the official association of New Age retail store owners in the United States. The Visionary Awards are “judged by retailers and seasoned professionals who determine the best metaphysical, mind/body/spirit books, music, and sideline products which have positive energy and flair.”

George designed the world’s first modular pendulum system in 2011. It is a system where a gemstone point can be used in multiple products, such as pendulum necklaces, pendulums, L – rods, wands, and with aromatherapy products.

Please register for our new website. We apologize for the inconvencience:

If you have previously registered at this website, please login: